Da Vinci's Mystery is a 9 payline game in which a mystery worthy of its name unfolds on the reels. Mona Lisa appears alongside various books and items. The same symbols must appear on the 5 spinning reels in order to get payout.

In the Stake section, you will be able to determine the bet using the plus and minus buttons. It's worth thinking about the bet before placing it, because the reels spin quickly, so your money may also run out fast. After setting the bet, the game can be started with the circular arrows under the reels. There is a turbo mode at your disposal, which speeds up the spins of the reels, making the entire game faster. Awesome opportunity for the impatient.

During the game, the same symbols must be spun on the paylines. If this is successful, the winning amount will be based on the payout table. The highest paying symbol is Mona Lisa, five of which by the end of the spin will earn you 450 times the bet amount. 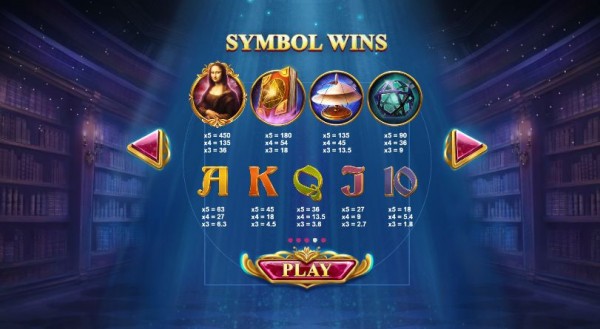